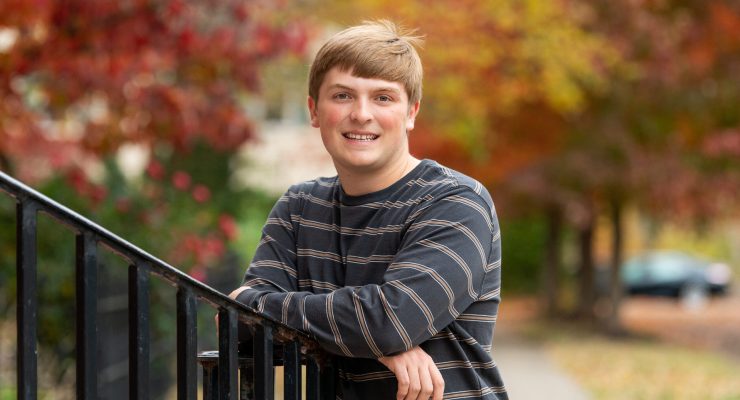 MADISON, Indiana – The Community Foundation of Madison and Jefferson County is pleased to announce the recipient of the 2023 Lilly Endowment Community Scholarship for Jefferson County – John Mitchell Adams of Madison Consolidated High School. Lilly Endowment Community Scholars are known for their community involvement, academic achievement, character, and leadership, and are awarded a full tuition scholarship to the Indiana four-year college or university of their choice.

Mitchell plans to major in Sports Media and Broadcasting but is currently undecided on a college. He is the son of Troy and Kristy Adams of Madison. Among many accomplishments, Mitchell is ranked at the top of his class. He is involved in band, plays the piano and organ for local churches, is a member of the National Honor Society, and attended Hoosier Boys’ State. He works at WORX/WXGO Radio and is a commentator for the World Racing Network.

Upon learning of the award, Mitchell commented, “I am so grateful to the Community Foundation, Lilly Endowment, and everyone involved in this process. This has opened up a lot of new opportunities for me that wouldn’t be possible otherwise. I could not be more honored to have been selected and to have been a part of a great group of finalists.”

Five Jefferson County students ranked in the top ten percent of their classes were slected as finalists for the 2023 scholarship. In addition to Adams, the remaining finalists were Jordan DeAtley (Southwestern), Brady Jackson (Shawe Memorial), Kaitlyn Rutledge (Madison Consolidated), and Elijah Turner (Shawe Memorial). These four finalists will each receive a $1,500 Community Foundation Scholar Award from the Community Foundation of Madison and Jefferson County for their efforts and achievements.

In determining Jefferson County’s Lilly Endowment Community Scholar finalists, consideration was given to strong academics, school and community involvement, and character by the review committee. Award nominees were submitted to Independent Colleges of Indiana (ICI), the statewide administrator of the Lilly Endowment Community Scholarship program, which approves the final selection of scholarship recipients.

Each Lilly Endowment Community Scholarship provides for full tuition, required fees and a special allocation of up to $900 per year for required books and equipment for four years. The scholarship is for undergraduate students on a full-time basis leading to a baccalaureate degree at any eligible Indiana public or private nonprofit college or university. Lilly Endowment Community Scholars may also participate in the Lilly Scholars Network (LSN), which connects current scholars and alumni with resources and opportunities to be active leaders on their campuses and in their communities. Both the scholarship program and LSN are supported by grants from Lilly Endowment Inc. to ICI and Indiana Humanities.

The primary purposes of the Lilly Endowment Community Scholarship Program are: 1) to help raise the level of educational attainment in Indiana; 2) to increase awareness of the beneficial roles Indiana community foundations can play in their communities; and 3) to encourage and support the efforts of current and past Lilly Endowment Community Scholars to engage with each other and with Indiana business, governmental, educational, nonprofit and civic leaders to improve the quality of life in Indiana generally and in local communities throughout the state.

Since 1991, the Community Foundation of Madison and Jefferson County has worked to build a strong, vibrant community by helping donors provide perpetual funding for the people, projects, and passions of Jefferson County, Indiana.

Lilly Endowment Inc. is an Indianapolis-based private philanthropic foundation created in 1937 by J.K. Lilly Sr. and his sons, Eli and J.K. Jr., through gifts of stock in their pharmaceutical business, Eli Lilly and Company. Although the gifts of stock remain a financial bedrock of the Endowment, it is a separate entity from the company, with a distinct governing board, staff, and location. In keeping with the founders’ wishes, the Endowment supports the causes of community development, education, and religion. The Endowment funds significant programs throughout the United States, especially in the field of religion. However, it maintains a special commitment to its founders’ hometown, Indianapolis, and home state, Indiana.

Since 1997, Independent Colleges of Indiana has administered the Lilly Endowment Community Scholarship Program statewide with funding provided by Lilly Endowment Inc. Founded in 1948, ICI serves as the collective voice for the state’s 29 private, nonprofit colleges and universities. ICI institutions employ over 22,000 Hoosiers and generate a total local economic impact of over $5 billion annually. Students at ICI colleges have Indiana’s highest four-year, on-time graduation rates, and ICI institutions produce 30 percent of Indiana’s bachelor’s degrees while enrolling 20 percent of its undergraduates.